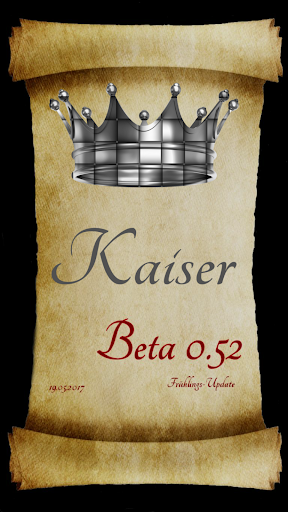 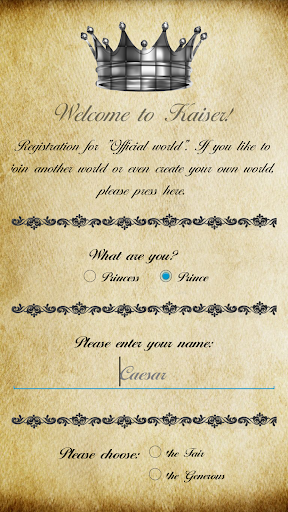 Welcome as new Prince to Kaiser! At the beginning your Highness own a small Empire. Collect taxes and grain from your citizens but keep in mind that high taxes will move your citizens to other empires and if there is not enough grain your citizens will starve.

By spending your gold for new land and mills, you will raise your income too. There are also general events in the world (historically accurate) that can affect your Empire. In time your Empire will raise and your title too.

Unfortunately, you have not the only empire (at least in the official world), because many other players strive also for power, wealth and especially victory. By doing anything necessary to win this game, you have to send your troops to loot in neighboring empires. Goldmines are another way to ensure a regular income for your empire, but military forces are required to hold a mine. You can also found or join an alliance to achieve your goals together with your allies.

Through the establishment of universities, it is possible to research in various fields.

Completing the palace as Emperor will make you win the current game round and gets you a place in the game history.

Game Features:
– Completely free (no InApp purchases needed), no advertising
– MMOG / means many players can play simultaneously
– Resource-friendly – the game takes a theoretical approach, epic battles with elaborate animations are absent
– One year in the game one day corresponds in reality
– A game round takes about 3-4 weeks, then all players start all over again with the same conditions
– Each winner of a round is immortalized in the app
– Play alone in your own world (free) or just with your friends (inApp purchase required)
New in 0.74
– Flatrate buy problem solved
– Support for new app icons
New in 0.73
– Alliance leader can invite players, even if the players are in protection time
New in 0.71
Bugfix profil picture upload, you can now change your playername in the profil options
New in 0.7
– Technical update, switiching from eclipse to android studio
– FAQ update
– Bugfixes
APP ID =de.chriscs.kaiser