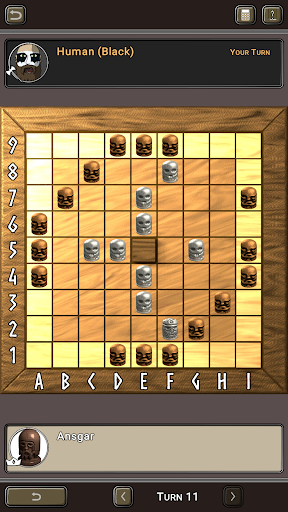 Hnefatafl is an ancient Scandinavian board game whose variants were played all over medieval Europe before chess was even invented. In those so called Tafl games two different sized armies fight each other. The invading black army tries to capture the white king, while the defending white army tries to protect their king and help him escape.

Often also called the Game of the Vikings Hnefatafl tells many stories, like the Moskowites invasion of Sweden or the Viking hordes pillaging Britain. But no matter what the story is one thing always stays the same: The hunt for the king.

Even though the rules aren’t complicated the game offers fascinating strategies and rewards tactical play. Try to surround the enemy pieces, plan ahead, lay traps and force your opponent into surrender. Will you capture the king for gold and glory? Can the loyal guards hold back the invading forces and secure the flight of their king?

For offline and online play you can create your own custom variants — with over 200,000 different variants possible!

The game features cross platform play with iOS, Windows and Linux and you can use a single account to access all your matches from any of your devices. The multiplayer is asynchronous so you can continue your matches whenever you want.

This app is supported by advertisement which can be disabled through a one-time purchase of IAP.

Includes artwork created by Thomas Jacquin (http://www.thomasjacquin.com) which are part of the Tafl-Sets of Legend Board Games.
During a match you can now activate the Planning Mode which will allow you to play as both sides, trying out moves and strategies without affecting the match itself.
Finally fixed the invitation bug where the invite remained in the main menu even after accepting or declining it.
APP ID =com.fellhuhn.hnefatafl